You should use the % operator

I have a problem with this task. In the screenshot you can see it. 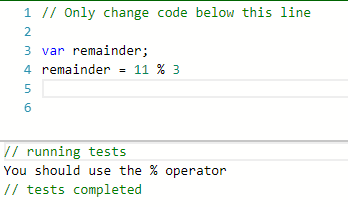 There was a missing ;

That could be the reason. But semicolon is not that important in javascript though.

I agree. However, if instructions occupy lines of their own then you don’t need a semi-colon.

Oh I actually didn’t know that. Thanks for sharing.

It means it is safer to use a semi-colon after every instruction.

Yes, semicolons usually don’t matter in JS. Yes, there are some specific edge cases where it does make a difference. There are large debates for and against. I’ve worked for people that would hit me over the head if I used semicolons and my current employer insists on them. That is a debate for another time and place.

It looks to me that it’s just a problem with the test:

It doesn’t look like it’s made to handle the possibility of leaving off the semicolon, it expects it to be there.

Remember that FCC is made by volunteers so things get put together somewhat ramshackle sometimes. I don’t know if FCC has an official policy on semicolons. I think it’s just that some guy/gal put together this test that way.