I’m looking to get some feedback on my Pomodoro project. I guess there were some copyright issues surrounding the name as its now called 25 + 5 clock. This project took me way longer than I expected and I’ll list some of my roadblocks and concerns here. 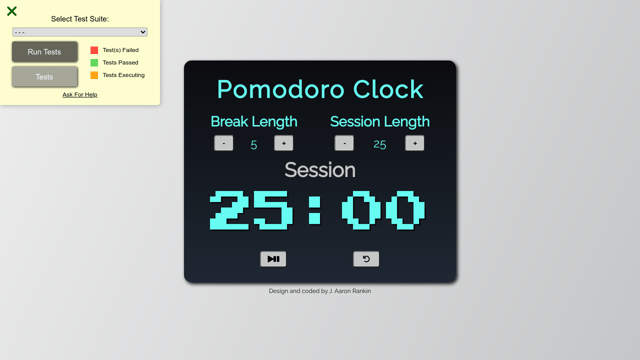 In general I’m glad to have this project “done” but I’m sure I have some superfluous bits of code, especially the css. I still really feel like I’m throwing stuff at a wall to see what sticks with css.

Thanks for the feedback. I went ahead and made a lot of those changes.

I’m not sure how to fix the very last issue you mentioned though. I did fix the background disappearing by moving the background color to the body, but the title is still disappearing with no scrollbar when you increase the font size enough. My mobile view looks worse now too

My suggestion is to always start styling your projects with your browser as narrrow as it will go and then work your way wider.

Hey I appreciate the continued feedback. I started from scratch on the styling. Hopefully what I have now is a more mobile first approach. I also removed some of the weird inline styling and consolidated it all to the css file.

I’m still not sure how to handle diminishing vertical sizes or if I should even handle it at all considering is seems like an unlikely edge case. Resizing the width should behave much better though.

It does indeed look better but there are still a few issues remaining:

I didn’t realize there was a text only zoom function. I thought that was the same as ctrl + or ctrl - so I learned something there.

I’m seeing now that I still have the problem with part of the app getting cut off if you shrink it small enough or zoom large enough, and even if I remove the overflow hidden rule you can’t scroll to see all the content. I’m not sure how to handle that, is it related to my use of flexbox?

edit
actually looking at the example project it seems to have the same problem as mine, if you shrink it small enough the top of the app gets cut off and you can’t get to it via scrolling.

I didn’t realize there was a text only zoom function.

You’re not alone, a lot of people don’t realize this until it is pointed out. But it is a huge issue for accessibility. As you get older and your eyes start to go you’ll be thankful for it

Responsive design should be responsive to both changes in view port width and changes in text size. One of the easiest things you can do to ensure both is to use em units instead of px units for your CSS break points. When you increase the text size, the width of the page in em gets smaller (even though the width in px stays the same). Using em units for break points takes this into account. Narrow your browser as skinny as it will go and crank the text size up to 300% and you’ll see that it looks pretty good but the time display is cut-off at both sides. So you’ll want to figure out how to handle that. Maybe show the minutes and seconds on separate lines? Or make it so that you can use the horizontal scroll bar to view it. We generally like to suppress horizontal scroll bars as much as possible but at huge text sizes and narrow view port widths it is sometimes a trade-off we have to make.

Once you have it looking good at skinny/large text, then decrease the text size back toward normal (while still keeping a skinny browser width) and create a break point if needed to as the em width value increases. Then once you have it looking good at skinny/normal text size you can start widening the browser window itself and adding additional break points if needed (again, in em).

One last note, when going from narrow to wide you will add your CSS break points using min-width, not max-width. So your base styling will be based on narrow/huge text, then your first break point might be something like min-width: 15em and then your next one (if needed) might be min-width: 30em. If you do this correctly, then your page is pretty much guaranteed to look good on any display at any width.