The lessons before and after these lessons do allow the code to be tested but no these 2???

I am able to run those tests both when they should fail and when they should pass. Usually when I’ve seen users report that tests aren’t running, they are actually running and failing. You could also have a browser compatibility issue.

Thanks, I was getting the test wrong, but it wan’t telling me that either. It wasn’t reporting it was wrong either if I left it blank and submitted. It tells me I got it right though when I did eventually get it right

The failing tests will be visually indicated with an 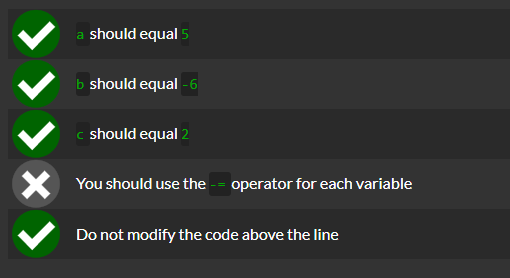 This wan’t running either, hence why I posted as thought there was a bug!

Hi
I am having the same issue
When I hit Run Tests nothing happens, there is no Testing
Browser: Chrome