Hi everyone, I would love to get some feedback on my drum machine project. I decided to take it a bit further and add a sequencer. Tech stack is just React with Zustand for state management. 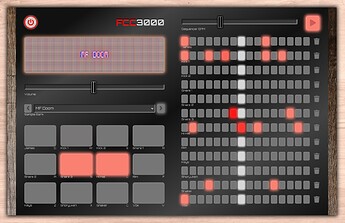 It currently doesn’t pass the FCC tests (because they for example prevent you from having additional pads on the R/F/V keys), but I have an earlier version with a smaller feature set that does, for the sake of the certificate.

I think an important next step would be to work on best practices/performance. So I would be grateful if anyone has some points for what I’m doing wrong or good references on how to approach improving it.

The sound doesn’t seem to be working for me. I’ve got the volume cranked up to 100%. I know my sound is working because I just tested my own drum machine and it is working fine. I’m also seeing this error over and over again in the console:

“Uncaught (in promise) DOMException: The media resource indicated by the src attribute or assigned media provider object was not suitable.”

It appears to be coming from line 11 in playSound.js.

This looks very nice, much more appealing than mine (http://bbdrummachine.surge.sh/). But I think you should reconsider your decision about requiring a minimum width. The majority of people out there are surfing the web with phones. I understand why you did this but there are ways you can narrow the sequencer controls (see mine).

Speaking of keyboard users, there is no way for them to start the sequencer because the start button is not actually a <button>. Putting a click handler on a div is not enough to make it keyboard accessible. Use a <button> like you did for the sound bank controls. Same goes for the trash cans.

There are some major accessibility issues for people using screen readers but I won’t go into those now. You can message me directly if you are interested.

But don’t get me wrong, I do like this a lot. Accessibility is my area of interest and so I always am always pointing out those issues. But this looks really cool and I can’t wait to hear it once the sound issue is fixed.

I figured out the sound issue. The <audio> element doesn’t actually take the ‘type’ attribute. If I get rid if that then the sound plays. If you were using the <source> element inside of <audio> then you could use the type attribute if needed.

This is Awesome for me. lol

Thank you for the thorough feedback! I would like to get this project to job application portfolio quality, so accessibility and just in general getting the details worked out is important to me.

Again, thank you so much for taking the time to look at my project

There’s still some performance-related stuff to do.

If you really want to make the sequencer accurate then you’ll need to do the following:

The following article is a must read to understand this.

A Tale of Two Clocks - Scheduling Web Audio with Precision

I’m still struggling to get playback working in Safari

Switching to the Web Audio API will solve your Safari delay problems with the <audio> tag, but I did run into a few issues with iOS and the API. I don’t have time to go back and look but I do have these URLs with the code for specifically addressing these issues:

How to: Web Audio on iOS