We were supposed to ignore the digits and special characters

My code is also very clean, and it works perfectly.

I need some explanation concerning RegExp.

According to the following example
str.replace(/[\W_]/g, '').toLowerCase();

I read the following link: https://developer.mozilla.org/en-US/docs/Web/JavaScript/Reference/Global_Objects/RegExp

However, i did note found any mention about the use of the following characters: _ [ and ]

Can somebody explains to me their usage?

Hm I came here after I solved my solution, but my answer looks like nothing everyone else posted

Granted its not the most optimal solution in terms of how fast it calculates the answer (supposedly reverse() takes a lot of computational power, but oh well heres my working OC answer

I was quite surprised at people using forloops and while loops as well though. I didn’t even use any

brief explanation of how code works:

The first part cleans up the code. We don’t want nonalpha-numeric characters, and the recommendation was to use the string.prototype.replace() method as one of the suggested things to look up

The replace method takes in two inputs, where the first input can be a regex expression, according to the MDN. Last input I just used '' to delete matching statements.

I had almost no conceptual knowledge of how regex works for the longest time (asides from the 4 lessons on freecodeCamp) so I watched this first video on derek banas regex tutorial 1, which I found very helpful 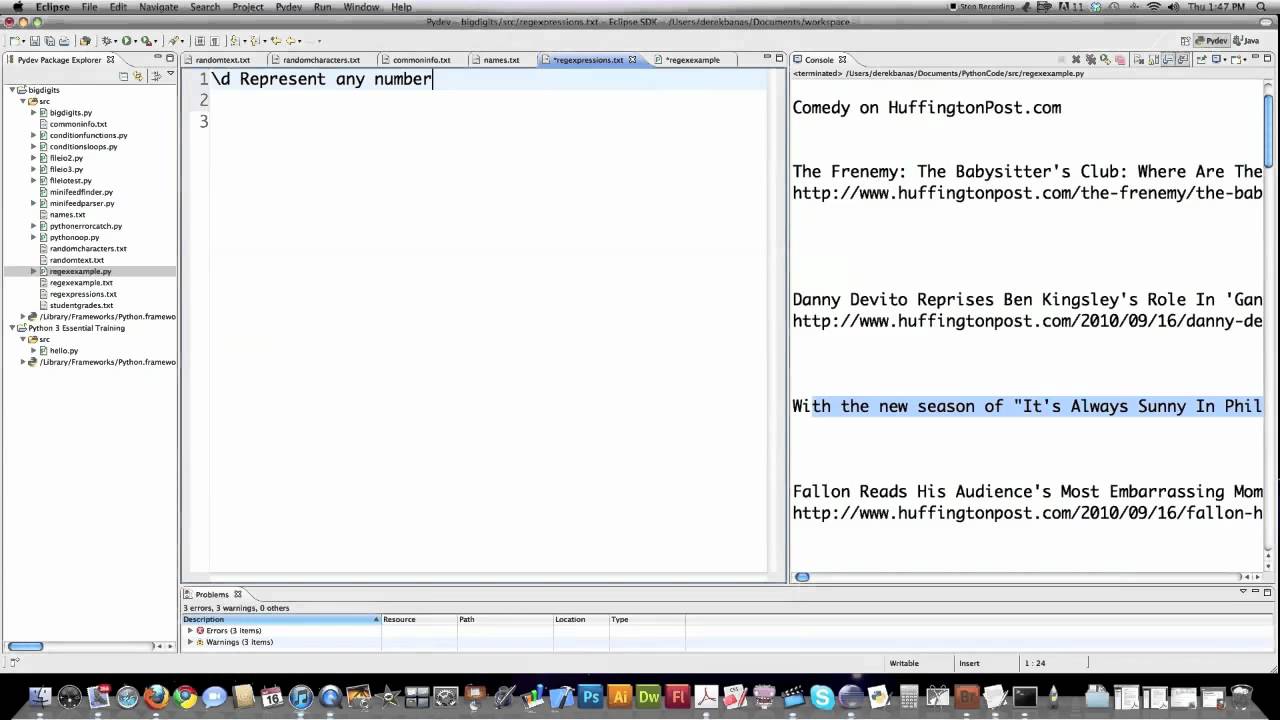 This gave me enough of an overview so I then looked into online RegEx tools to streamline my testing:

After checking many recommendation on online regex tools and recommendations from reddit/stackoverflow https://regex101.com/ was very robust with many useful library cheat sheet quick references at the bottom right

Being lazy in actually testing all the inputs, I decided I would just copy paste the test-case scenarios at the bottomleft on the freecodecamp problem and paste it right in and test the regex statements

Instead of actually checking for things like commas, underscores, punctuation marks, etc I thought it would be significantly simpler to just check for alphanumeric characters and then do the reverse of it. Since there’s so many operators (including unicode chars) like !@#$%↑<,→↓_|{}();’./ that could be in the palindrome statements.

This wasn’t the case, but you know it could’ve been something to test for too.

Anyways, this is what my regex expression does on the var re = /[^a-z0-9]/gi;, which is the most difficult statement to understand

Also, the other long statement var pstr = str.split('').reverse().join(''); . That’s the official answer from the previous solution you can find it here : freeCodeCamp Challenge Guide: Reverse a String . I used that as a template

I used repl.it to do all the testing per FCC recommendations

The built in console with FreeCodeCamp is lacking and doesn’t allow console.log() statements to make it easier to debug problems with your code. Repl.it requires absolutely no setup, super intuitive, and is probably the most uncomplicated way of having testing javascript that I’ve found (tried Chrome tools, Visual studio code, JSbin, Atom.io, cloud9 ide)

Anyways I suggest using repl.it instead of the freecodecamp debugger

Intermediate solution needs to have ; on it for clarity.

I edited the wiki to reflect the correct statements

My Solution. I obviously had some fun making my regEx expression variable.

Is there anything inefficient from my code?

Is there a reason why advanced solution is slowest on this test?
jsperf - palindrome

Can someone read through my code and tell me if the method is acceptable and if there is some tweaks you would add to make it more readable/shorter/perform better :

The code I came up with is similar to the basic solution:

However, what I had at first was:

which kept on returning true even when the string was not a palindrome, and I still don’t understand the reason for that. Can anyone help me understand why?

My code works, but i dont know what about quality…

This is what I did. Works perfect, not sure about its efficiency though. Would love some feedback!

Because you have not filtered non-alphanumeric characters (punctuation, spaces and symbols) in the string.

What do you guys think of my solution?

Hi there peeps, this is my first contribution, my solution to the palindrome problem. I think it falls into the Basic Solution category. Any feedback will be welcome