hihi! So I looked up how to do it, so I don’t need help with the issue, but as far as I can tell, there’s no way to solve Step 16 of the CSS Markers lessons without using outside sources.

It tells you to add a second class to the div, but at no point up to that lesson have you ever done that, nor is there any indication that what you actually do is add it to the first class with simply a space. The error message is also incredibly unhelpful in that regard.

Any time we’ve done multiples of things, it’s been with commas, or adding a second one, so presumably someone would just either add another class variable and fail, or try with a comma and fail.

the screenshot shows an example of how this could be both confusing and frustrating, because i have both the classes in the div, and have been given no explanation of why it doesn’t work: 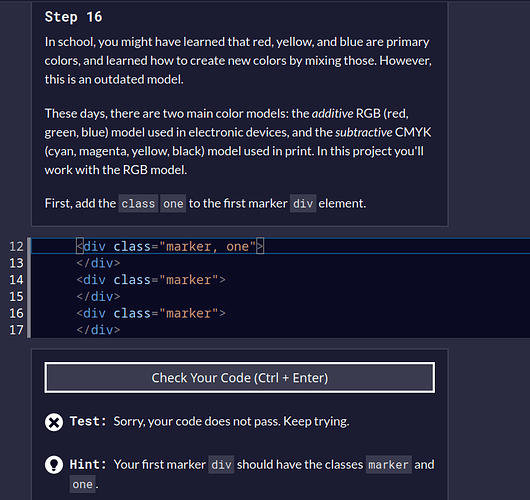 I am really enjoying the new style of lessons, and i can’t wait for the rest of the lessons to catch up, and i was just hoping pointing this out could help, or at least be a way for someone to show me where there was this concept covered before this lesson.

hello and welcome to fcc forum

i bet googling was helpful for that! and about your remarks on ‘not mentioning it before’, could it be in any of those previous chapters they mentioned it even for a moment somewhere!! cause they usually do!!

I think you might be right, but it’s very cumbersome to check with the way the challenges are set up now (step numbers).

I’d suggest you open an issue for this on GitHub. Maybe someone more familiar with the challenges can confirm and if so suggest a change. i was actually wondering how to do that haha

thanks! I’ll submit one now

Oh yeah, googling is great, it’s just kind of weird for the course to be so good about explaining something the first time it’s brought up, and I haven’t seen multiple classes brought up at all in the 4 hours I’ve been doing the lessons

in that case please feel free to open up an issue in fcc github repo as lasjorg has already mentioned earlier, happy learning

done and done thanks haha

I’m actually jealous… I did the old corriculum and was a bit frustrated with how simple it was, didn’t offer any chance to think for yourself, bascially giving you the answer to each problem right above it. I think creating a situation where you might do it wrong a few times and need to think helps embed the correct method deeper in your mind, but I guess there’s a fine line between helpful and frustrating… the hint probably should be a little more clear.

It isn’t custom for the curriculum to ask that the camper does something which hasn’t been taught. If this truly is the first time multiple classes are introduced then the challenge isn’t doing a very good job of explaining how it is done syntax-wise.

It’s really strange. Every step before they tell you “how to do it” before asking you to do it later. It’s a step up in “difficulty”, a little hint to google what you don’t know might be necessary.

This time it’s just “Do it”. Probably serves to show the reality of building pages for real.

It is a known issue and should be fix at some point.

### Describe the Issue This issue has come up a few times on the forum and most… recently in this [discussion](https://forum.freecodecamp.org/t/magic-marker-course-step-16-add-class-one-to-the-first-marker-div-element/509938). [This lesson](https://www.freecodecamp.org/learn/2022/responsive-web-design/learn-css-colors-by-building-a-set-of-colored-markers/step-16) wants users to add multiple classes to the `div` element but they are not shown how to do it. Most users will write this which is incorrect. ``` <div class="marker" class="one"> </div> ``` We should show users how to properly add multiple classes to an html element by providing a small code example in the lesson. ``` <div class="exampleClass1 exampleClass2"> </div> ``` ### Affected Page https://www.freecodecamp.org/learn/2022/responsive-web-design/learn-css-colors-by-building-a-set-of-colored-markers/step-16 ### Your code Provide a small example for beginners ``` <div class="exampleClass1 exampleClass2"> </div> ``` ### Expected behavior N/A ### Screenshots _No response_ ### System - Device: [e.g. iPhone 6, Laptop] - OS: [e.g. iOS 14, Windows 10, Ubuntu 20.04] - Browser: [e.g. Chrome, Safari] - Version: [e.g. 22] ### Additional context _No response_

Sorry but no, It wasn’t explain on any lesson before. I had the same problem, that’s how I ended up reading this. I think the point of fcc is to learn on its platform, not searching answers on Google. Thank you Bellhuffstutler for enlightme!

suit yourself, more often than not, you’ll find ‘googling’ about stuff will broaden your interest, it was a general remark

and of course explanation beforehand regarding “multiple class” should have been there, and there is an open issue about this in fcc github repo as well, feel free to add an comment there if you would like, thanks