I’m scratching my head at this one. Basically the document loads with empty fields for Temperature and Degrees symbol, which I update with jQuery after user clicks “Get Weather Data”. The problem comes when I try to reference the html of the Temperature field. I had changed the html with jQuery to reflect the JSON data from API, but when I try to check the value of #temp in the console, it returns “function()” (not a number as I would expect). Please take a look and let me know what you think!

Here is the code for updating temp field when Degrees field is clicked:

I had originally tried checking what the value of #temp was and comparing that to variable temp, but ran into the same problem. Here is link to the full CodePen: https://codepen.io/hburn11/pen/WEyLGp

and then change the following if statement line

and then the following else if line

to just an else

I see now that when I had tried running with .text() I had left off the parentheses. Thanks again for your help today and the other day.

Would appreciate it if you could off just some general feedback on the appearance/layout of my weather app (https://codepen.io/hburn11/pen/WEyLGp).

Just as an info: I’m guessing you tried to match the weather image’s background color but you are just a tiny bit off. If that’s the case the right one would be: #272a33.

Also, on a smaller width screen, I see: 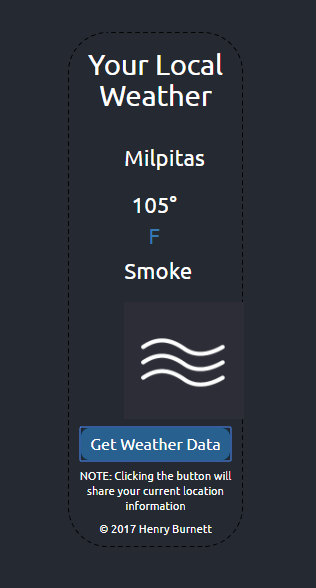 The degree unit is on a separate line and the icon is shifted to the right.

Thank you both. I changed the background color and will do some digging to keep degrees on same line and keep icon centered