I did the calculator challenge previously, but I’ve been going back over my old projects and overhauling them, basically, because they didn’t look/function that great. Please let me know what you think!

Just one I noticed, when the number is long it goes out of the screen: 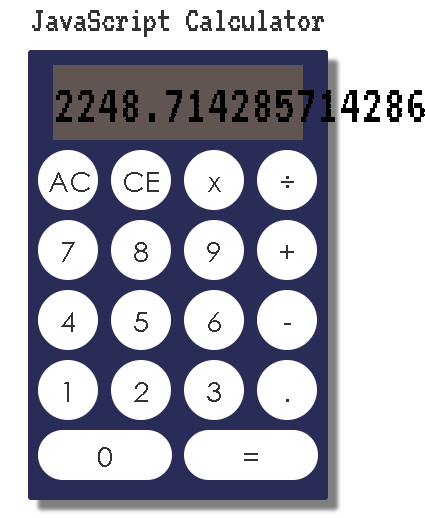 The CE button does not appear to do anything and definitely does not do what it is supposed to do (only clear what has been entered before an operation has been performed on the entry).

Also, you should not allow multiple decimal points, +, -, *, or division operators to be entered consecutively.

I can type the following:

Even though pressing = does not attempt a calculation to display, a normal calculator would not allow such operations.

Hm, I’m not totally sure why it’s doing that. I have it so that if it exceeds 9 characters, an alert pops up and it clears the screen. 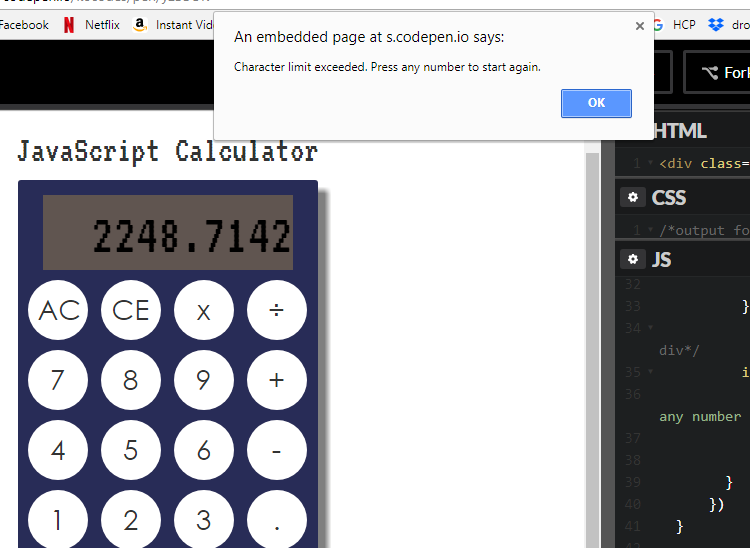 Just kidding. I just realized it still goes outside the calculator if the /answer/ is longer than 9 characters, so I gots to fix that.

One thing to fix is that you shouldn’t let double commas so this cannot happen; 25.3.1
Shouldn’t be hard to implement!

Keep up the good job!

I believe I fixed that issue! Thank you for pointing it out!

So, I updated a lot on the calculator, and I believe I fixed all the issues mentioned in this thread. Thank you guys so much for pointing them out! Sometimes I get ahead of myself before I’ve really checked all the bugs and what not.

It looks great and kind of retro! I didn’t find any more bugs that weren’t already mentioned.

Wait, so did it still have bugs? Because I’m pretty sure I fixed the issue with the number exceeding the length of the screen, double digits, etc.

Nope. I just meant that other people had already pointed out the bugs. Is CE supposed to delete the " * " before an operation has been performed?