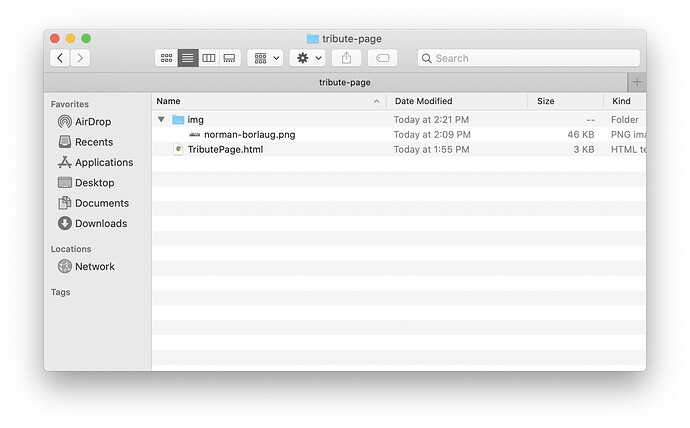 I been trying to figure out why my image doesn’t show and i haven’t had any lucky can some explain where i went wrong the image is in a parent folder called tribute-page then in that folder is a folder named img and that’s where the image lies.

I assume you’re opening the file TributePage.html with your browser, right? (To display it as HTML, I mean).

Otherwise, could you share your code on github.com? Your entire project.

is supposed to display this image but it doesn’t why?

Without seeing the rest of the code, I can’t tell you why

Based on your project structure, I can say that what you have here is correct: <img src="img/norman-borlaug.png" alt="Norman Borlaug in a field smiling" id ="image">.

Use the developer tools to find errors on the console of your browser. How you open them is usually with F12, but I see you’re using Mac and I don’t know the key combinations. On PC is: F12 or Control + Shift + i.

. Maybe I’m misinterpreting the folder structure (not used to Mac)… Are you sure the folder structure you initially posted is the correct one? The only reason for it to work when you move the file out of the img and tribute folders is because your TributePage.html is outside of them both too.

I just tested your own code on my computer and it works as expected, without modifying anything. I just put the img folder and the TributePage.html under the same folder and the picture inside img.

@_manual, it looks as though TributePage.html is in the img directory in which case you’d just have src="norman-borlaug.png"

Some things to note;

based on this article, to insert images from another folder, you can add the / sign before the name of the folder to create a relative URL

. Relative is without the /.

In this case is best to use a relative one, otherwise you may be referring to a folder called img at the root folder of your system (unexpected results).

Oops, that’s what I mean…