I have spent over 600 hours coding steadily over the past year using the pomodoro technique. (It actually works for me.) With all that studying I still feel that I cannot actually do anything. Is there a way to clear this hump? It’s actually pretty demoralizing and I feel like I’m blocked by a glass wall. I’ve learned everything from Java to Python, even some C++. Not a master in any of the languages but I have a good grasp on the concept and syntax. Does anyone have any recommendations on how to overcome this period I’m in?

I’m currently unemployed and want to use this time effectively while looking for another job.

What have you built?

Think about anything you can automate or solve a problem. pick any language (probably one you know best) and start working on it

A little turned based game with rpg mechanics for Android based on FF7 by Square-Enix (That’s where the art and music came from). I haven’t opened up the Android SDK in a long time. (I still have the source code I wrote though, made sure to keep that.) After the Android phase I was in I moved to Python and Web Dev. 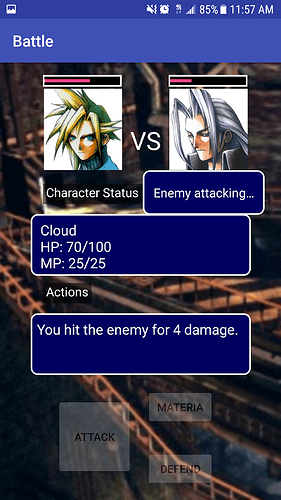 Focus on one language and get good at it.

Ideally stick with one main language and build things in it - definitely get distracted and play around with other things, but keep at it with that main language. Once you know one language well, once you know it’s weaknesses and you’re confident in it, the second language is much easier, the subsequent languages easier still. Building software isn’t just a case of knowing language syntax: the language is just a tool to build the software, you need to be able to wield it.

When I found myself feeling a similar way, I found it helpful to review available job opportunities on popular mediums like stackoverflow. This gave me a pretty good feel for what value I could already provide to the job market and what skills I could improve on or even might be lacking all together.

Feeling confident that you know a language (or several) is great, but you should also be asking your self objective questions that will determine your value in the job market, and tell you what kind of job market your skills are best suited for.

If you wanted to specialize in the front-end for the web, then you would focus on learning a modern front-end JS framework e.g (Angular or React). Similarly, for every job market open to programmers, there will be a sub-set of technologies and skills that it’s developers are mostly required to know.

You might want to be a mobile app developer, a 3D game developer, or a full-stack web developer.
But whatever the case, you should zone into the market that you’re targeting and become an expert on what it demands. At that point you’ll have a solid foundation for moving forward in your programming career.

Your game looks like it could be kind of neat. I wouldn’t call that “nothing to show”. do you have a sample up to try? I was a big fan of ff7 when it came out.