I was recommending Free Code Camp today on another forum and had a small pause before doing so as jQuery is a module in the curriculum.

I don’t hate jQuery - I credit it with bringing JS to where it is today (ES6 & browser homogeneity). It’s just that the only time I use jQuery in work is to support legacy apps, although PHP devs in work use it still to build interfaces for admin side apps.

So what do you all think? Replace the jQuery module with something else?

I suggest good old vanilla JS with an ES6 focus, using MDN as a reference.

I’m also happy to contribute in the development of this both in coding and curriculum material.

The upcoming curriculum update will feature vanilla JS and ES6 first before jQuery. You can see what it looks like here: https://beta.freecodecamp.org/en/map

(I’ll also post a screenshot in case the page won’t load; it wouldn’t load for me a while ago) 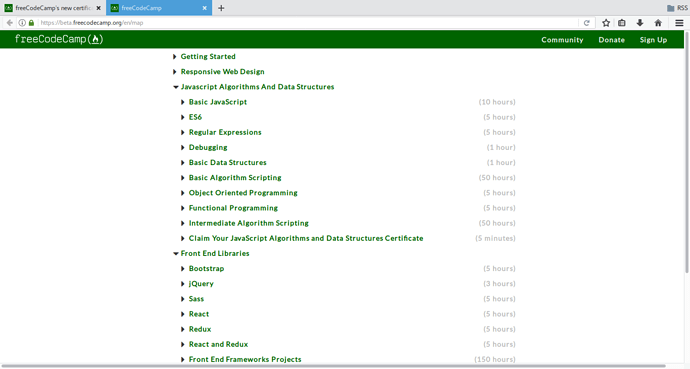 There’s also no requirement to do the jQuery challenges or to use it in your projects. Some of the projects can involve some considerable DOM manipulation which jQuery makes considerably less painful. Many members of the community encourage campers to try sticking to vanilla JS, but it’s a personal choice. I am of the opinion that jQuery is a nice, gentle way to introduce students to the relationship between HTML, CSS, and JavaScript.

I totally understand where you’re coming from.

My personal viewpoint is that JS is in a much better place now than when jQuery came on the scene. I feel jQuery is a little redundant at this stage and just adds one more thing for students to learn.

I’m trying to think back to when I first started learning JS. I remember wanting to go the vanilla route but being terribly confused by MDN. At the time I liked some of the syntax of jQuery.

It’d be great to hear from people starting out to hear what they think of the whole thing.

What drew me to Free Code Camp was the clear path it offered to learning practical development with JS. I’m just not sure if jQuery is still a part of that path now.

Though this page https://w3techs.com/technologies/details/js-jquery/all/all seems to say that 70% of sites still use it. So looks like I’m way off on that

Yeah, it is the most popular JS library there is, as pointed out with more than 70% of sites using it.

I know it’s trendy and cool for people to say they hate JQuery and not use it. It seems the more popular something becomes, the more people will histrionicly say they hate it.

I would agree that people should learn to use vanilla JS too, but JQ is a nice way to simplify a few things and that’s especially helpful for beginners.

Personally, I don’t see the big brouhaha about jQuery.

It’s not like JS -OR- jQuery. It’s not one or the other. Users still need to use/learn Javascript to use jQuery. jQuery is just a library for manipulating the DOM, DOM effects, hiding all the ugly details.

I guess one can avoid jQuery if they really dislike it and write everything from scratch JS, and spend 10x the amount re-inventing the wheel, and dealing with cross browser compatibility. Then they can say they’ve saved 84K (min.js) in file download. … then they go use Angular2.min.js with 566K file size download

I guess in the end, it’s up to the end client if they specified in contract to the web developers no jQuery for use in their website. In reality, the end client couldn’t care less if you used jQuery or not. All they care about is does it work, does it look beautiful, works beautiful, inexpensive – or will it took too long to develop, expensive paying for extra developer hours, buggy on some browsers.