Hi, I’m close to finishing my internship and getting ready to start applying for full time jobs, as I will be entering my senior year of college. I’ve been trying to improve my resume, but wondering what others think about it, and would appreciate any feedback. You can see my last post to see the resume I had when I first started applying to internships last year.
Resume 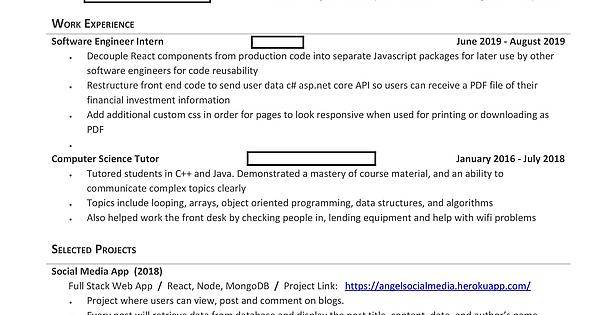 Good resume overall. The main thing I’d suggest doing is rewording your experience and projects to be less technical. In the vast majority of cases, the people reading your resume will be recruiters and company HR reps, and not software developers. So make the wording more accessible and understandable to the average person. Also, put your experience in terms of accomplishments, using numbers if you can. Just describing what you did isn’t generally impressive.

thanks, will work on that.

Hi, I tried changing up my internship description, but after reading it over, I wonder how I could try making this look less technical, so recruiters would understand it. I’ve also replaced my last bullet point with the testing that I have done.

So to my first point, I pretty much took react components from the production code and had them put into npm packages, other engineers then used that code again in the production site using the npm package. Wasn’t really sure how to word this in a less technical way, but I tried.

My second point was that I had to change a lot of code in the front end to pass data to api in asp.net core. The current code pointed to a different api that was slower, and the new api needed a different json code, so I had to pass similar data to the new api in new json format. Not sure if recruiters would understand “c# asp.net core API”, maybe I can replace that with “database”?

My last point was that I used jest and enzyme to create unit tests. It was supposed to simulate user actions, such as clicking a button, which then something happens. Or if a user types something in text input.

You’re thinking way too low-level in terms of your job experience. Think high level instead—what did you accomplish during your internship? Did you receive any recognition from the company? Did you implement something in less time than your manager expected? Is there anything you did that resulted in a measurable difference—i.e., faster performance, lower number of errors, etc?

Also think in terms of business—is there something you did that saved money, time, or effort that someone else would have otherwise had to put in?

Literal descriptions of how you coded something aren’t very interesting to read. The sentence “Restructure front end code to send user data…so users can receive a PDF file of their financial investment information in faster time” for example could be re-worded to this for more impact:

Refactored the front end of X application to send PDFs containing financial investment information for a delivery time improvement of Y from Z.

thanks, I understand now