This is super hard so i quit

He left, long ago.

He was talking about the Basic 2nd front end, so the Porfolio page? I guess.

Good supplement…but a huge part of this career is being able to Google your way into understanding things. And that never really stops…

Going through research here in FCC’s forum, I came across a few guides and decided to go through https://forum.freecodecamp.com/t/computer-guide-computer-science-and-web-development-comprehensive-path/64470. I’m going through this to take me through the various levels. I’m familiar with the beginnings of the Guide, but I’m going through it all (some parts with speed and accuracy and other parts in slow motion). Back to coding.

I found that second project, the portfolio, pretty difficult with what knowledge I had learned through FCC. I started as as super noob and didn’t really know anything.

I recommend everyone that tries FCC to search other resources as well. One that has worked well for me is Khan Academy. The videos and baby steps has really helped me with my notes and basic knowledge base to build from.

What my jiu jitsu coaches say about being a black belt applies to coding too.
You’re gonna be somewhere in ten years so you might as well be a black belt. A black belt is only a white belt that never quit."

I refuse to quit.

interesting that you mentioned Khan Academy for BootStrap supplemental material. I couldn’t find squat on bootstrap training on Khan Academy, but JavaScript is available, although not in-depth.

I still find it hard, but I haven’t quit! Keep going, it’s such a great feeling when you, or with some help, solve a problem and it’s all up and running again! 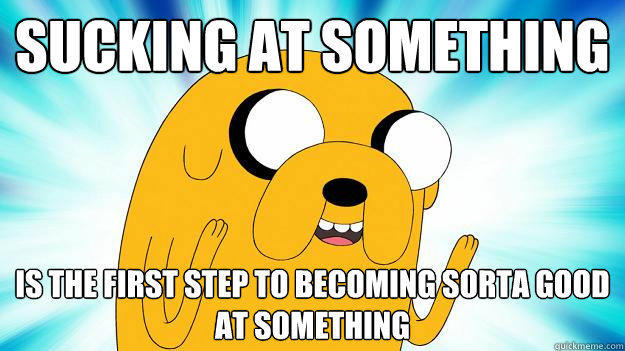 Don't give up, you got this!

This is a post for those struggling with maintaining their motivation and passion. I’m no code expert and am still learning, but I thought I’d share my own story and hopefully other newbies can relate and perhaps get a few new ideas. Motivation is...

Just found that for you

I didn’t mean to imply that bootstrap was available at khan. It was really the super basic html and css that I have went through over there. I’m still lost when it comes to bootstrap. w3schools had some stuff that I found through google but I’m still looking for a good comprehensive bootstrap reference.

Sorry I was unclear.

@enimorla Andrew,
All is well

the OP is long gone and the issues raised by the OP have not been addressed. There’s definitely an assumption of some coding knowledge (prerequisite) that is NOT disclosed prior to starting FCC. And therein lies the issue with people starting and leaving this resource.

Another issue is the challenges are worded in language that is NOT layman friendly, it is using the afore mentioned assumption of prerequisite coding knowledge. This is easily verified by a simple search of these forums.

A solution to this is to use language the layman can understand, similar to the language used in very popular book series like For Dummies and Head First. Some will disagree, but I hold fast to this solution. The FCC site IS targeting the layman and should seek similar learning styles and language that is successful and widely used outside of “coding” to train individuals. It’s a bit myopic of FCC to think their way is the only way to success.

FCC is NOT layman friendly for sure! The For Dummies books are my friend.

Working through what little bit of FCC I have so far, what I have found is that it forces me to think of what I don’t know. While I am using some of the more layman friendly resources it has made me realize when topics are very important because of those questions FCC has raised during the challenges.

It would also work to just add an additional section before the front end stuff that contains the assumed prerequisite info. More advanced campers could skip it while people like me could go through and gain that needed info.

I think u should consider keeping up. Noting in life is easy! When you were born u took 1 year to start speaking so why are u considering to give up after only one week coding? I think u should see FCC certification as a path to knowledge! When they ask u to do a project, they tell u to RSA! Read, Search, Ask! This means that u need to read a lot, get some books, check some forums, see some youtube videos. FCC helps u to get thru the problems to make u study and get the real info the job needs. Don’t quit! Stand up man!

When we start working as developers I guess in our work we’ll need to continue Reading, Searching, Asking to provide solutions for the daily challenges. It’s not a job that u have to press the same button everyday. So you need to get the mindset and also the mind tools to search for what u need.

It’s okay to quit. Everybody has to choose the wisest use of their own time. Who knows maybe the OP had a passing interest in coding and it only took a week to figure out this wasn’t their cuppa tea. I call that a win. At least compared to spending years in a vocation that doesn’t thrill ya. Maybe OP will go on to be a world class {something else}. Or a middling one but be very happy doing it.

It’s perfectly okay to quit. But there are alternatives to quitting if that’s what somebody needs:

(I quit coding once, after doing it for so many years that I got to hating it – well actually I hated baggage that I let go along with it,but that’s another story. It may sound absurd but I even resented the money I was making because it made it that much harder to let go and do something else. But a few years later I allowed myself to change my mind. And FCC helped a lot.)

So it’s useful, if not not without cost, to have a lot of what’s been poured out above. I do think the positivity pays decent dividends.

Coding takes a lot of time, dedication and patience to learn. I started coding a few years ago during a certificate I did in college, and while admittedly I am having an easier time now thanks to it, it’s still generally hard. It’s supposed to be hard, and I think you should probably complement it. With other courses and books. @P1xt has some nice guides, check them out. I’m currently going through one of his guides, doing other Udemy courses, and also doing FCC (it’s taking more time since currently I’m on a break getting through other material, but that’s okay).

Also, as others have said, 1 week is too fast to get to the second front end project. Did you go through the curriculum or did you jump straight to the projects? You can’t expect to build an entire project with no difficulty after only 1 week. I studied for 2 years in college, studied principles of programming and all, and now even with all these resources it’s still a challenge, though it’s a challenge that I like.

Perfect practice makes perfect. Simple practice just makes speed. Anything worth doing well takes effort and persistence.
There are a lot of things I wish I was good at now that were “too much trouble” at the time. There is satisfaction in being able to do something really well because you know it dead cold. In twenty years you won’t regret the time invested in learning something you love but the time wasted foolishly that could have been spent studying something you wish you had learned.
Keep at it. You will be glad you did! Once the hardest thing you ever did was learn to tie your shoes!

I looked at that one and I was super intimidated. Then when I broke it down into the sum of its parts it was much more doable. I tried to make my page look similar to the link that show up with the project. Just used color variation and a lot of divs.

I admit that I looked at the source code a couple of times to see how something was done and got overwhelmed but the I remember at that point I had only been coding for about a week and I would pick up the stuff that I did not use as I went on.

Here is my page for the project it is not super flashy but it meets the requirements and I am pretty happy with it. It will get better as time goes on.

You just have to be persistent and remember that google is you friend. Also ask in the chat. I asked a question about my form and had an answer within seconds and was able to work it out from there.

Hey, don’t give up so easily! I am an absolute beginner too and it took me two days to get my way around My portfolio project and I still have to apply some makeup to it. They are right, you know, everything you need is on the net, you just have to invest some time and patience. Even though, I don’t know much either, I notice improvement and even some confidence on a daily basis. Don’t deny yourself so much fun!

Please do not give up. I am an IT manager for over 10+ years. In my opinion, the most important quality for a programmer is perseverance. Not many of us can be geniuses like Brendan Eich or Quincy Larson, but “not giving up” is something we can all do. Effort, hard work and a good attitude eventually pay off and can make up the difference in skill levels.

Hey, I checked out yours and it’s great!! Love what you did… Good Job!!

Thanks for checking out my work, Snave! I actually had to put FCC in standby for a while because of my current job, but I hope to finish front-end soon

I have to say this stuff is very difficult. I told my husband the other day that it seems like the challenges start out teaching how to do one set of things, and then you get a challenge that says “Ok, now that you know all of those things, build something with it! Here’s some terminology you’ve never seen before - but we’ll get to that later.”

I was going on Google to search way before I read that it was alright to do so - I felt like an idiot that needed more instruction. Understand that I just failed Air Traffic Control Academy and half of me is saying I’m completely stupid. The other half is saying I did that for 4 months - day in and day out, aviation. Started from scratch and even though I failed, I need to be proud that I tried and I didn’t quit.

I think sometimes all we need is perseverance and subsequent failure to find something that we won’t quit.

I’ve done 160 challenges since Saturday. I’m keeping myself on a schedule to do at least 40 a day, 60 is a goal. In addition to that, I need to understand what I’m doing so I keep at it. I search and investigate and keep in mind that nothing worth it comes easy. What comes easy isn’t worth it.

Quitting won’t do anything. Let’s all keep going!!