EDIT: I modified the script and I was able to pass almost all of the tests. The output of the script shows exactly as the “examples.txt” file. I update the script and the database dump in the repo: 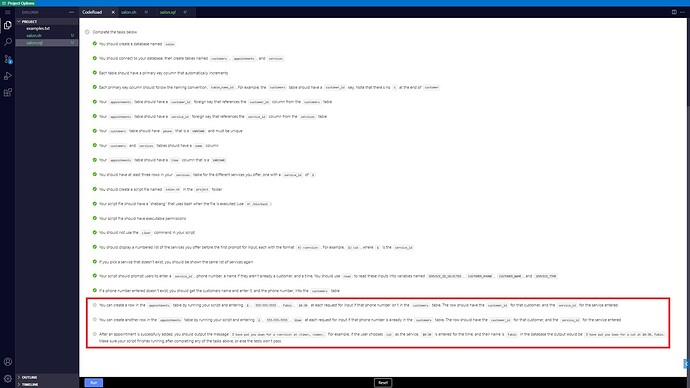 I am not entirely sure if this topic belongs to “Project Feedback” but I will try to describe my issue the best I can.

I am trying to comply with all the requirements in the tests, however, I am having trouble with a few specific bullet points, sometimes the tests are passed and sometimes they are not., e.g. the " You should display a numbered list of the services you offer before the first prompt for input, each with the format #) <service> . For example, 1) cut , where 1 is the service_id" test used to be ok but now it’s not. I understand this might be due to the logic I used on the script but I have reviewed the script several times and can’t seem to find any reason as to why the test wouldn’t pass. Also, the script is currently not 100% functional since I have not looked into the “Cancel Appointment” section.

I researched the forum and I think I found a similar issue to mine:
Build A Salon Appointment Scheduler - Backend Development - The freeCodeCamp Forum

I provide a screenshot and the .sh and .sql files for the project.
GitHub repo: franciscxjavier/Build-a-Salon-Appointment-Scheduler: Salon Appointment Scheduler created using bash scripting and PostgreSQL. (github.com)

I have deleted the container with the issue and restarted the tutorial but I get the same behavior from the website.