Feedback on an html game

This is not a project from freecodecamp, but I made an html game and I would just like some feedback on it. thanks!
here’s the link:
https://codepen.io/Glaurung/pen/pBGdpj

I didn’t make it to the end because I kept dying, but this is a well implemented choose your own adventure game!

Not to detract from your HTML / JS learning, but if you really want to go down a rabbit hole, I recommend looking at Inform7. It’s a powerful text adventure language and SO MUCH FUN! There’s a web-based version you can experiment with at Playfic. You can even see a very odd assignment I completed for my Education Masters when I was more interested in programming than continuing on with my teaching career!

If you keep dying, there is a button that says ‘last choice’ in the failures and deaths that will bring you back to your checkpoint where you die.
thanks for the info! I will look at it!

how do you learn the language and make your own? I can’t find any editors to experiment in.

You can play around with an editor here: https://playfic.com/edit/ or download the Inform7 IDE which also has integrated docs. You can view the source code of existing games on playfic too, to get a sense of the language.

Here is the source code to a very simple one I wrote for a year 9 English class so they could learn to write their own, including some commented instructions at the top.

do you happen to know where I can watch some tutorials about this language?
that is pretty cool, but kinda weird. it’s like another language to me even though it is english.

There’s some stuff on YouTube IIRC, but it’s been years since I looked at this stuff

@ConnerOw1115 Hey bro,
Nice work. I see you put a lot of effort into your project. 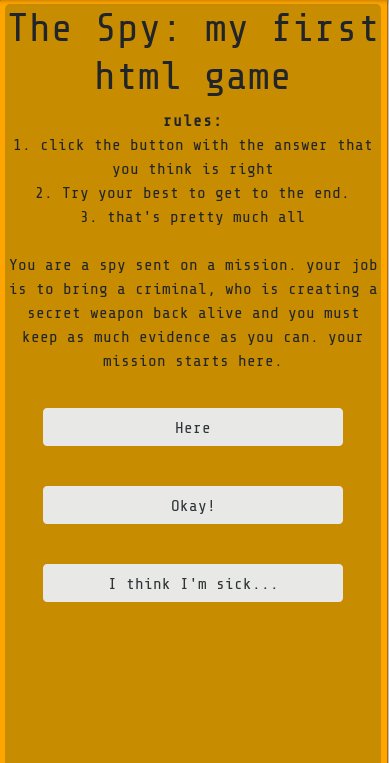 I made it look dark. click the link again!
I’ll just try to add some sound effects later.

I can do sound effects, but I can’t find any sounds. so I can’t make it

@ConnerOw1115 check the soundbible.com website. That is where I get sound effects from.

Thanks! I’ll try and take a look at those.

That was a pretty cool game , it took me about 20min to find my way to the end.

I can’t add sound. the sound should have an https link to it, but I can’t find that.