This is quite likely the best book that’s ever been written about game development.

Masters of Doom follows John Romero and John Carmack - the creators of the 1993 classic video game DOOM - as they go from cranking out several games a month to starting their own company and producing the most important 3D game ever.

It covers a lot of major technology changes, Carmack’s pioneering 3D rendering techniques, and how they managed to squeeze a game that people can play for hundreds of hours into a mere 2.4 megabytes.

There’s plenty of humor and drama. The audio version is read by Will Wheaton (the actor who played Wesley Crusher on Star Trek and has since become a pop culture icon). 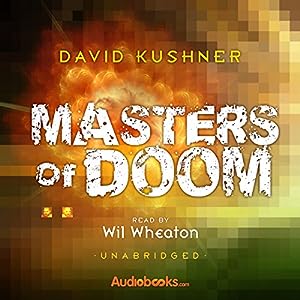 Fantastic book! Playing the game when I was younger, I would have never imagined the drama involved - nor the intensity of John Romero’s hair

ps. awesome idea with the book review category. I’ll definitely be adding some!

This book is a great read. I would definitely recommend it if you’re interested in the history of the video game industry or even just the life of Carmack and Romero.

Is this book “historical interest,” or is it "practical training?, @QuincyLarson?

Historical interest. I would not recommend doing things the ID way in 2016

They accomplished great things, but there are saner ways these days.