May i ask for help? Page is visible but can not pass the test… 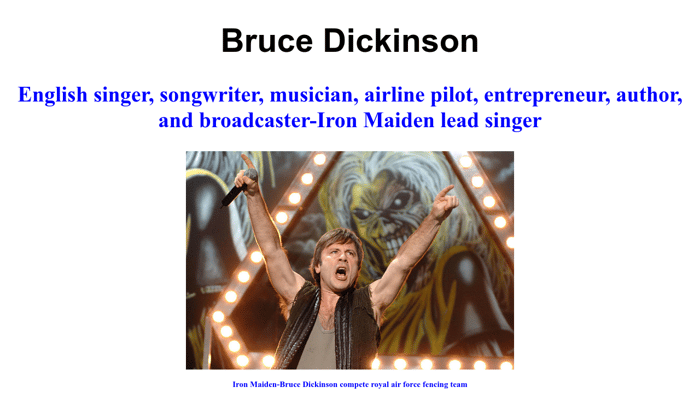 
And this is the code: 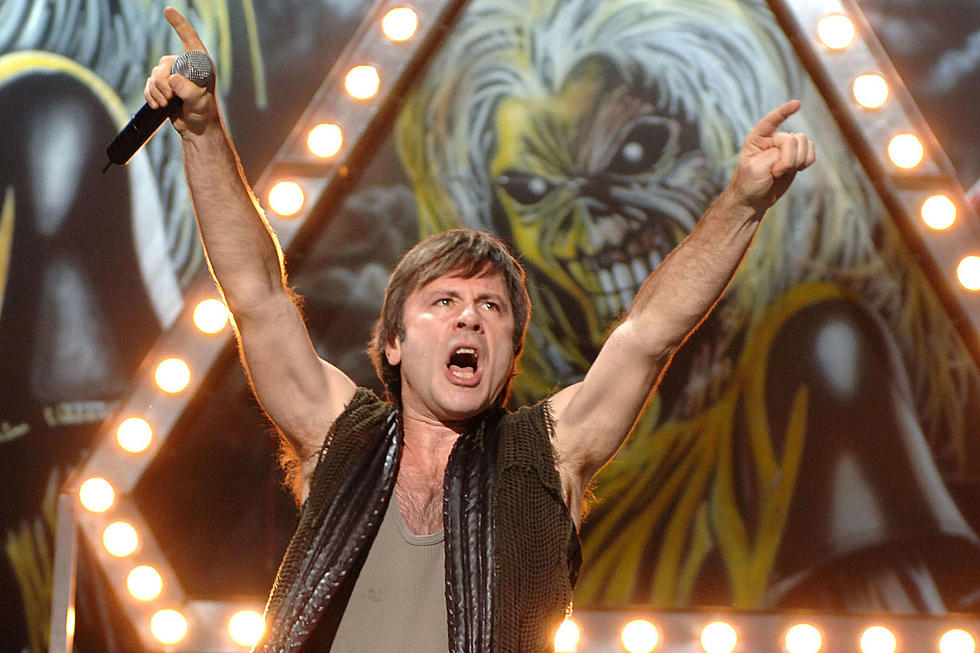 Paul Bruce Dickinson (born 7 August 1958) is an English singer, songwriter, musician, airline pilot, entrepreneur, author, and broadcaster. He is known for his work as the lead singer of the heavy metal band Iron Maiden and is renowned for his wide-ranging operatic vocal style and energetic stage presence. Born in Worksop, Nottinghamshire, Dickinson began his career in music fronting small pub bands in the 1970s while attending school in Sheffield and university in London. In 1979, he joined British new wave heavy metal band Samson, with whom he gained some popularity under the stage name "Bruce Bruce" and performed on two studio records. He left Samson in 1981 to join Iron Maiden, replacing Paul Di'Anno, and debuted on their 1982 album The Number of the Beast. During his first tenure in the band, they issued a series of US and UK platinum and gold albums in the 1980s. Dickinson quit Iron Maiden in 1993 (being replaced by Blaze Bayley) to pursue his solo career, which saw him experiment with a wide variety of heavy metal and rock styles. He rejoined the band in 1999, along with guitarist Adrian Smith, with whom he has released five subsequent studio albums. Since his return to Iron Maiden, he issued one further solo record in 2005, Tyranny of Souls.
His younger cousin, Rob Dickinson, is the former lead singer of British alternative rock band Catherine Wheel, while his son, Austin, fronted the metalcore band Rise to Remain.
Outside his career in music, Dickinson is well known for his wide variety of other pursuits. Most notably, he undertook a career as a commercial pilot for Astraeus Airlines, which led to a number of media-reported ventures such as captaining Iron Maiden's converted charter aeroplane, Ed Force One, during their world tours. Following Astraeus' closure, he created his own aircraft maintenance and pilot training company in 2012, Cardiff Aviation. Dickinson presented his own radio show on BBC Radio 6 Music from 2002 to 2010, and has also hosted television documentaries, authored novels and film scripts, created a successful beer with Robinsons Brewery and competed at fencing internationally.

Paul Bruce Dickinson was born in Worksop, Nottinghamshire. His mother, Sonia, worked part-time in a shoe shop, and his father, Bruce, was a mechanic in the army.] Dickinson's birth hurried the young couple, then just teenagers, into marriage. Initially, he was brought up by his grandparents; his grandfather was a coal-face worker at the local colliery and his grandmother was a housewife. This is referred to in his song "Born In '58" from the album Tattooed Millionaire. Dickinson started school at Manton Primary in Worksop while his parents moved away to Sheffield.[1] Soon afterwards, when he was six, he was also despatched to Sheffield, where he attended a primary school in Manor Top. After six months, his parents decided to move him to a small private school called Sharrow Vale Junior. Due to constant moving, Dickinson states that this period of his life taught him to be self-reliant as he was unable to make close friends.[6] Dickinson has a younger sister, professional showjumper Helena Stormanns, who was born in 1963. He tried to isolate himself from her as much as he could when he was young, supposedly out of spite because she, unlike him, was a planned pregnancy and birth. Dickinson's first musical experience was dancing in his grandparents' front room to Chubby Checker's "The Twist", when he still lived with them in Worksop. The first record Dickinson recalls owning was The Beatles single "She Loves You", which he managed to persuade his grandfather to buy him, which made him more interested in music. He tried to play an acoustic guitar belonging to his father, but it blistered his fingers. By the time he moved to Sheffield, Dickinson's parents were earning a good living from buying property, refurbishing it and then selling it for a profit. As a result, much of Dickinson's childhood was spent living on a building site, until his parents bought a boarding house and a bankrupt garage where his father began selling second-hand cars. The income from their business success gave them the opportunity to give Dickinson—then 13 years old—a boarding school education and they chose Oundle, a public school in Northamptonshire. Dickinson was not opposed to moving away from home because he had not built "any real attachment" to his parents, having been raised by his grandparents in Worksop until he was six. At Oundle, Dickinson was picked on and routinely bullied by the older boys of Sidney House, the boarding house that he belonged to, which he described as "like systematic torture" and meant that he became an outsider. His interests at Oundle were often military; he co-founded the school wargames society with Mike Jordan, and he rose to a position of some power in the school's cadet force, with which he was allowed to handle live ammunition, which he used to create explosions as booby-traps. Oundle was where Dickinson became attracted to hard rock, after hearing Deep Purple's "Child in Time" being played in another student's room. As a result, the first album he ever bought was Deep Purple's In Rock, which created his interest in rock music. After In Rock, he went on to buy Black Sabbath's debut, Jethro Tull's Aqualung and Tarkus by Emerson, Lake & Palmer. Every term, a band would play at the school, the first of these which Dickinson saw was called Wild Turkey, featuring former Jethro Tull bassist Glenn Cornick. After that, he saw Van der Graaf Generator and Arthur Brown. Dickinson initially wanted to play the drums, later obtaining a pair of bongo drums from the music room for practice. He remembers playing "Let It Be" with his friend Mike Jordan, during which Dickinson discovered his singing voice while encouraging Jordan to sing the high-notes. Shortly afterwards Dickinson was expelled from Oundle for participating in a prank in which he urinated in the headmaster's dinner. Returning home to Sheffield in 1976, Dickinson enrolled at King Edward VII School, at which he joined his first band. He had overheard two other pupils talking about their band and that they needed a singer and so volunteered immediately. They rehearsed in the garage of the drummer's father, and the band were impressed by Dickinson's singing, encouraging him to buy his first microphone. Their first gig took place at the Broadfield Tavern in Sheffield. Originally called "Paradox", the band changed their name on Dickinson's suggestion to "Styx", unaware of the American act with the same name. They made local newspaper headlines when a steel worker was awoken by their performance and tried to smash the band's drum kit. Soon afterwards the band split up...

Does the test tell you anything, usually it tells you what test you haven’t passed?

It looks like it says you’re missing 2 id attributes, id=“main” and id=“title”. And from the looks of it, you’re not using the proper quotation marks (the look different from your other quotation marks). It kind of looks like you copied code from other sources and kept text styling and thats messing with editor. Your div element that’s supposed to close around the image is closing around all the text, too. Should be using figcaption element with image to add an image caption: https://www.w3schools.com/tags/tag_figcaption.asp. I don’t feel like listing the rest of the problems but if you run the test and click on the red test button afterwards it will tell which tests you didn’t pass. You should follow the build instruction given for the project.

Thanks for your advice, did not copied the code but did applied different advice online. I drafted a code in Word Office for better visual (do not like the implications). Maybe i followed it wrong, i am begginer? Results of the test are that only one task is fulfiled but page is visible, tried it in Chrome says 5/10?
I want to code my own page so concrete advice would go a long way. Can i run the test in Firefox browser?
Thanks again

Is it ok now:
https://codepen.io/mariodbk/pen/YzyVvrb?

Thank you, will do that. Still learning

Still can not pass, one mistake do not know how to correct, tried everything. As i can see from the other coders, problem is usual…
https://codepen.io/mariodbk/pen/NWGgWEM

You’re missing some very important tags, like the html tags and body tags. It seems like you might need to review the html section on freecodecamp. And maybe check out responsive design section, too.

@brandonsnow, codepen provides the boilerplate for users and only expects the code that would be between the body tags.
You can read their official documentation