VSCode: SCSS not compiling to CSS

PLEASE if anyone can help I can return it in endless virtual hugs!!

I’m working in VSCode using HTML, SCSS and Bootstrap. All installed via npm from the terminal. I was working on and suddenly came across a bug which led to 2 hours of time wasting to find out the SCSS has stopped compiling to the main style.css sheet. All the extensions are working fine. I have the sass --watch extension and it is ‘watching’.

When I make changes directly from the main style.css sheet I can see the updates on the browser. So the issue is just the SCSS to CSS. Why is this happening and how can I solve it?

On a side note… I feel this may be relevant though unsure ->> I think it was at the same time that I ‘killed’ the terminal that this issue arose.

I’m beyond frustrated and any input is massively appreciated. 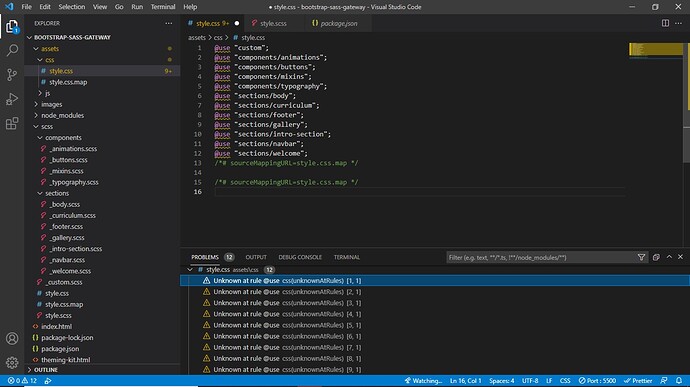 Did you try restarting VS Code?

Exit VS Code and use Task Manager (or whatever it is called on the OS you are running) to look for any stuck command-line processes (like bash or whatever you are using) if you see any force end them, then restart VS Code.

What extension are you using?

If it is Live Sass Compiler I would suggest you use the maintained version (FAQ).

I exhausted all options and Googled all day but no luck.

What extension are you using?

Everything was running smooth and I’m halfway through my project and suddenly it all collapsed in a moment!

I realised I had the umaintained Live Sass Compiler. But even when I installed the maintained Sass compiler and uninstalled the unmaintained one, my CSS sheet was still blank. I went to bed and got up in the morning and compiled via npm npm run compile:sass and the magic worked!
Even though I tried compiling via npm last night it still rejected it. But I guess the morning casted a spell

However now I have style.css and style.css.map in both my assets/css file and in scss file. It’s not bothering me now as I can continue working but I definitely need to look at it later.

occasionally my sass compiler is also refusing to take changes i made and nothing of short consequence seem to be able to fix it and it either fixes by itself(somehow) or i quit VS code and next session its working. My compiler also creates “map” file, which i dont bother with.

Strange that this happens occassionaly.

My compiler also creates “map” file, which i dont bother with.

It should create a map file by default because that is how sass is converted (compiled) into css. But my concern is that it creates two copies of style.css and style.css.map which I don’t understand why (see screenshot). 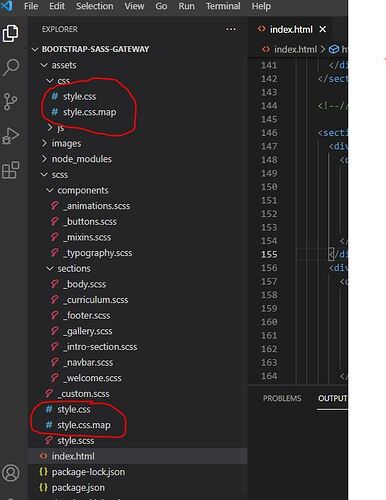