Why do people say you don't need math skills?

I went to college for two years, but my highest math course was probably algebra. I studied computer information systems, but didn’t get a degree (yet). Obviously, math is difficult for me. Luckily, there’s a huge debate about the necessity of mathematics proficiency in the dev ecosystem, with the opinion that it isn’t required usually coming out on top.

I’m always looking for new study material and resources. I don’t really do… anything else other than study, and search for things to study. In this cycle, I’ve noticed a trend amongst the highly starred, highly accredited programming courses/roadmaps on Github and similar websites: 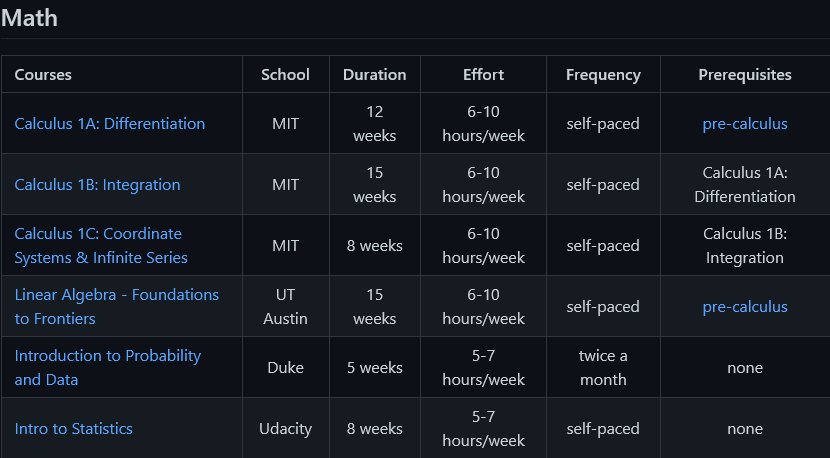 They all stress the same necessary prerequisite: Math! I don’t understand

Math underlies almost everything when it comes to programming. The field itself stems from mathematics backgrounds, and many schools “spun off” their Computer Science department from their Math departments, so there’s some historical background.

That said, being “mathematically inclined” isn’t required, but you will be using math if you’re a developer. There isn’t a way around it.

However, most of the math you’ll need day-to-day isn’t usually like the kind of math others thing about.

are all things you probably would only learn if your going into CS or looking to be a programmer, with data structures and algorithms being the “core” two that are always something you’ll run into.

Stuff like Calculus, and statistics are more situational, but important pretty often. For example, if I gave you a huge data-set taken from end users, and wanted you to tell me if a feature we deployed last month is gaining traction, you’d want to know at least some statistics to get that information.

Day to day even if you don’t go to school, or formerly learn math skills, you’ll have to gain them to be a better programmer at some point. Knowing your data structures are required to solve specific problems, and using the right algorithms so you code runs efficiently.

So yes math is “required”, but thats only because its essentially baked into programming.