Feedback on this personal project?

Hello all! I’m wondering if I could get some feedback on this personal project I’ve been working on?
https://6j0284w5jn.codesandbox.io/

It uses React, and I’m going to try and break it down into smaller components. I have some other ideas I want to implement like Hats, Female character, a little animation, and a way to save or export an image.

It’s still a work in progress; I realize there’s some parts that can be done a better and cleaner: (I don’t know why the thumbnail looks like that. I can’t figure out how to update it.)

So I’ve been working on this in the evenings and added a few features:
-Now there’s options to change Beard, Hats, Gloves*, and Race.
*Gloves are kindof m’eh.

Things I still want to do:
-I’m trying to break the bigger elements into Components. It’s a hard idea for me.
-I’m 50% done Facial Features.
-I still want to add a female character & maybe children.
-I kindof want to add CSS for mobile so it compresses into a single column.
-I’ll do the animations last so it’s not too annoying.

Do you think I could put it in my portfolio? Right now the only projects I have online are FCC projects and tutorials from Udemy.

dude you should put it on your portfolio!! It’s HUGE! Also try to fit it in a single screen, so that one can use it without scrolling.

This is very nice, however, I feel as if the color scheme does not fit.

The background image pattern is distracting, and the main container lacks styling along the edges. For instance, here is what the fallout skill point menu looks like: 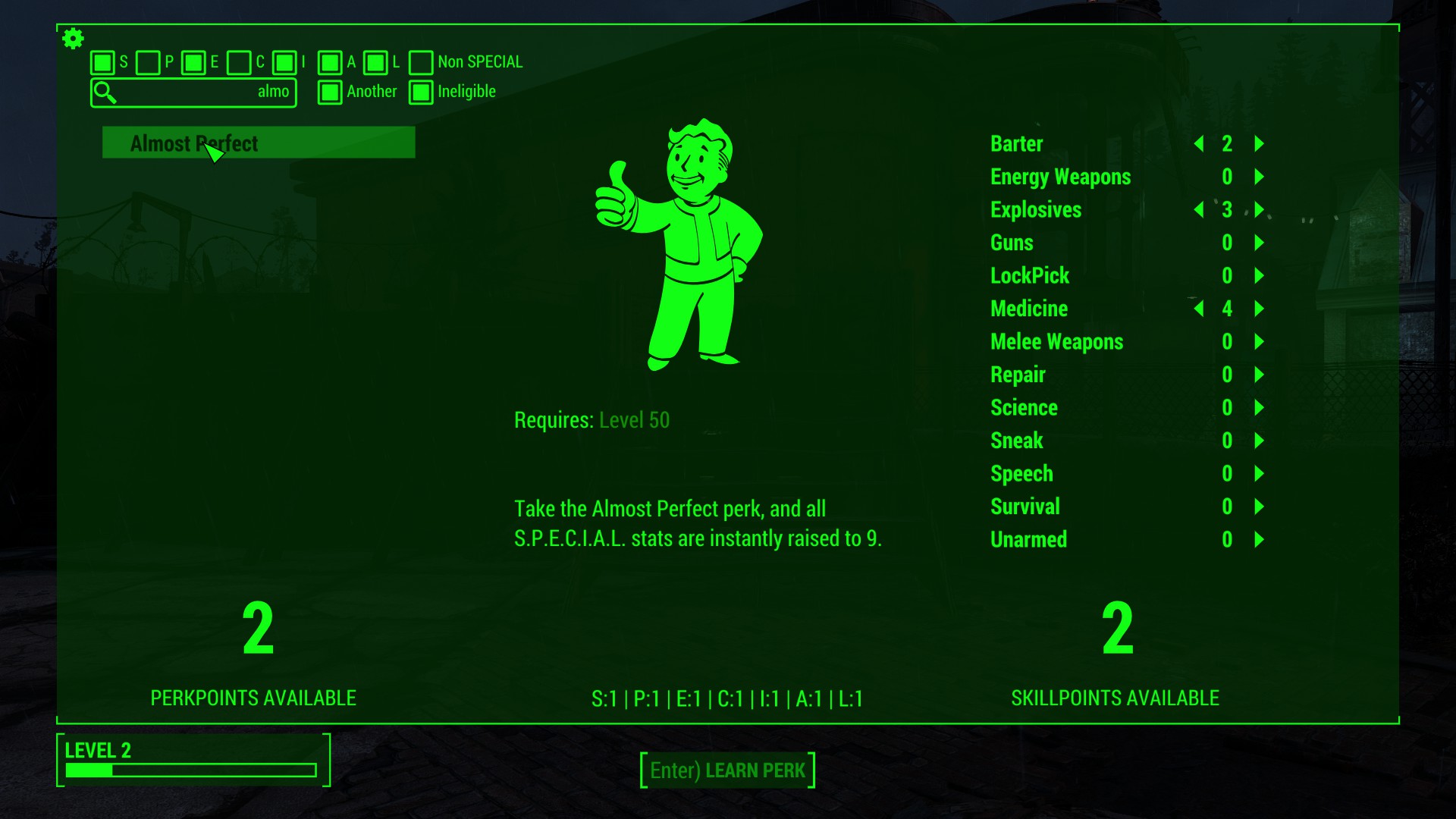 Use the design features from this menu to make yours make it seem more like the Fallout video game.

Please hit the reply button or I do not get notified.

Thank you for the suggestions! I’ve been trying to implement them but I’m not quite finished yet. (I’d also disassembled most of the app to try and add Female avatars; I’ve been trying to multitask between re-assembling & adding the new style.) So, some of the functionality is a bit wonky at the moment…

The main things to note:
-I haven’t fixed the borders yet.

-I’ve changed the background to one from FS. No more metal honeycomb, it’s a nice scenery shot.

-I’ve added 3 cursors; default, pointer, and text. (I’m not crazy about the text one…)

-I added 3 fonts; MonoFonto, Overseer, and Futura PT Condensed. But I’m still playing around with the fonts.

I feel as if the font is too big for your selection. Look at the example picture, and how you can nearly include 15 selectors/

@adam-weiler I challenge you to make a mobile version of your website. Fallout theme is awesome! I see you put some real work into this project.

Thanks again for your suggestions! I’m still adding and tweaking the code. I’m up to version 3 now:
https://2v1or125wn.codesandbox.io/

What’s new:
-I added a Basic/Advanced toggle. It starts off with 5 options instead of all 9 at first.
-I fixed the Random button, so it works for Female as well as Male.
-Also everything below.

@michaelnicol:
-I’ve made the font a bit smaller and each line closer together, to match the size in that photo.
-I got rid of the transparent black, I think it’s better without it.
-I’m not too sure how to combine the Buttons and Selection panes. One option is to put the “Shirt 42” on top and put “Vault Suit” right under in smaller font, but this might be overwhelming.
-Another option is to remove the “Shirt 39” text and just have “Vault Suit”, but then it’s unclear which buttons effect which style.
-I guess a third option would be for the Selections pane to float to the right-side of the Buttons pane, take up some of the white space on the side.
-The text cursor; I was trying to imitate how a web browser acts, but I wasn’t that keen on it.
-Also I figured out how to do the stylized borders on the panes.

@brandon_wallace:
-Thank you for the challenge; I added a media query to make it cell-phone friendly. I like how the text grows and shrinks as you resize the window, but the panes themselves don’t transition as cleanly.
-Thanx! Yeah, I try and work on it a little bit every night after dinner. I read somewhere it’s a good way to learn about React by coding something fun.

To your background image. Not sure if it will look all too good, but it is worth a try.

The race in the gender and race box does not change as you select different skin tones. Maybe you can change it to like “Slightly Brown” or “mixed” (etc) depending on the skin tone.

Please hit the reply button or I do not get notified.