This is not really related to the curriculum…
I’ve installed python3.9 yesterday on my windows 10…
Before installing I kept note of all the installed packages using pip freeze>req.txt.
Now after installing v3.9 I uninstalled python3.8.6 from control-panel>programs. it was all fine but I lost my installed packages.
So, today I was going to install all the packages with pip install -r req.txt but pip gave me error…
I fixed it by following folks on Stack Overflow, by deleting python38 directory…
But I’m unable to install them , I came across following error 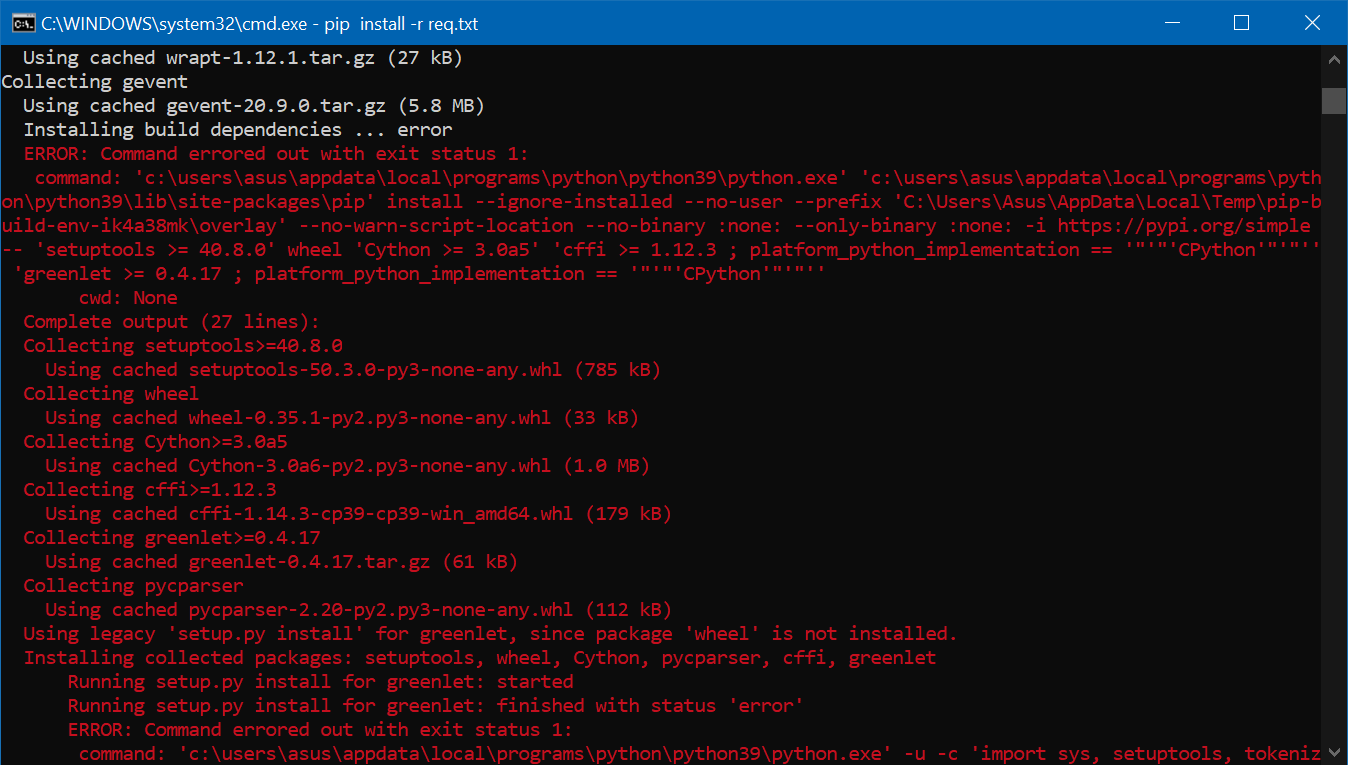 Next time u want to upgrade just

Run the command to upgrade python version.
If it prompts to update the pip version just do it.

Hi @mukeshgurpude,
It seems like it’s trying to use some cached version of your libraries. This issue is not new on Windows 10 [see this] (https://github.com/pypa/pip/issues/8272).
Since Python 3.9 is ery new, it may introduce conflicting behaviours or incompatibilities with some of the libraries you have installed in your system.
Before considering rolling back to a 3.8.x version, I would try to completely remove all trace of python by uninstalling from the Control Panel as you did, AND, physically deleting the folders; specially site-packages. This would permit you a clean install. the caveat is, if you have python programs you need for some other tasks, you will need to reinstall their dependencies too!
Cheers,

Then upgrade via the cmd line

How to upgrade python itself from command line, I’m unable to found such command in windows… Please guide me…

reinstall their dependencies too

do you mean external packages, right?

do you mean external packages , right?

About upgrading python from the command line, there is no way on Windows to my knowledge if you use the standard installable from python.org. On a Mac, you can do this via homebrew. Maybe this is the way @gururajankappa refers to. 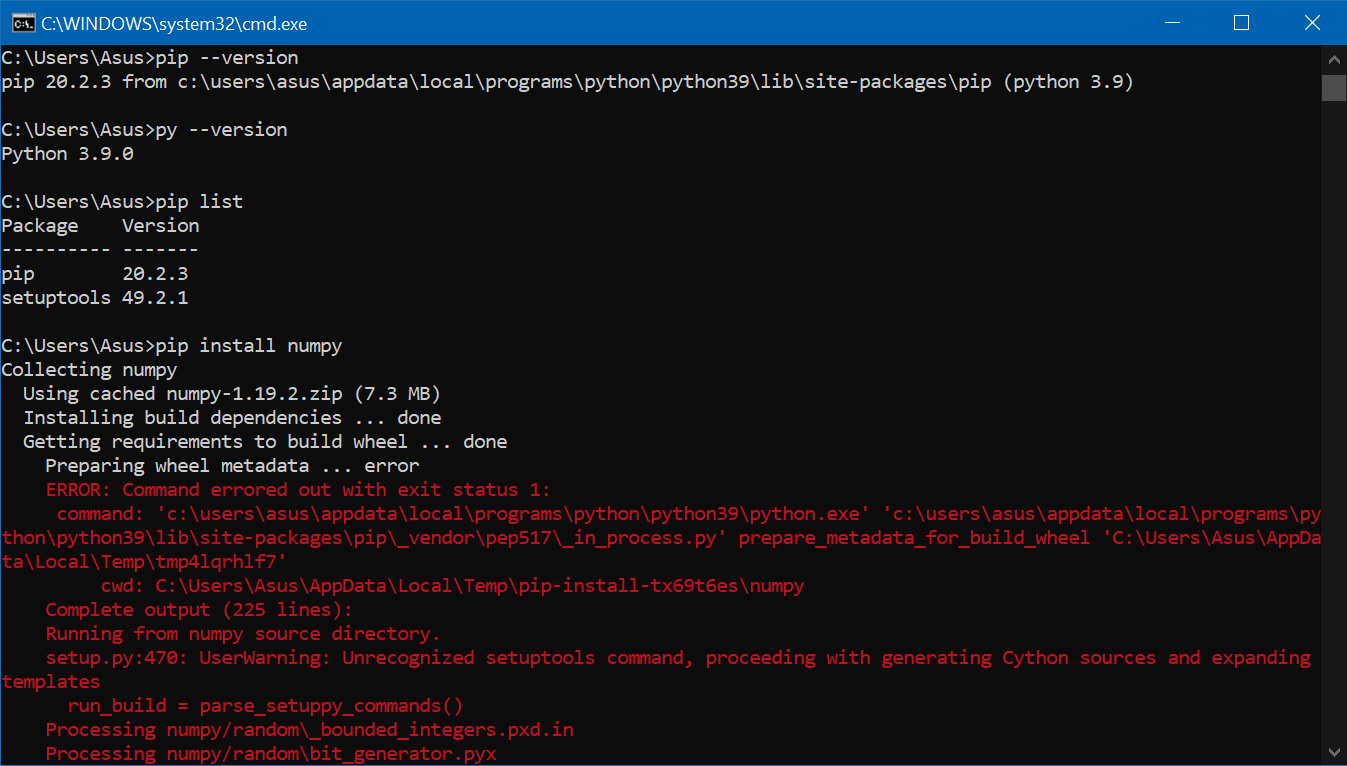 I made the following 2 tests.
I first installed numpy on a virtual environment under python 3.8.5 and it worked.

Then, I tried running the same configuration on a Docker container and it failed. 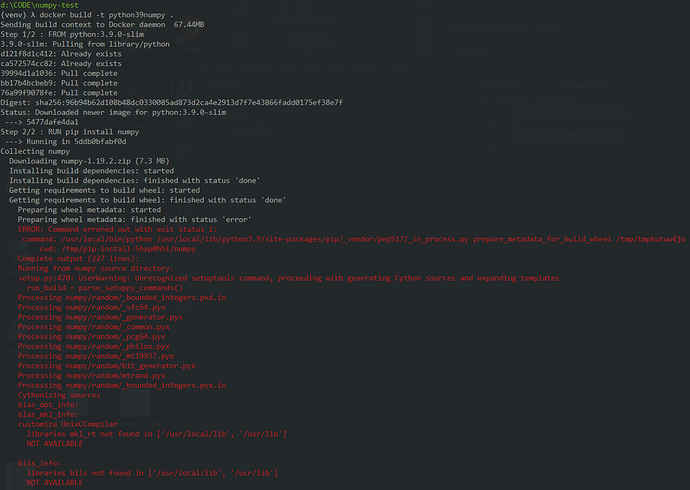 screenshot.71274×905 94.8 KB
This is a Linux debian image, so Windows is not the problem. I think there is some incompatibility between python 3.9 and numpy.

Can you downgrade to a earlier version of python? (You may want to wait until numpy release an update)

Actually, not only numpy there are many packages not optimized for python3.9…
Now I understood the importance of virtual environments for each project. 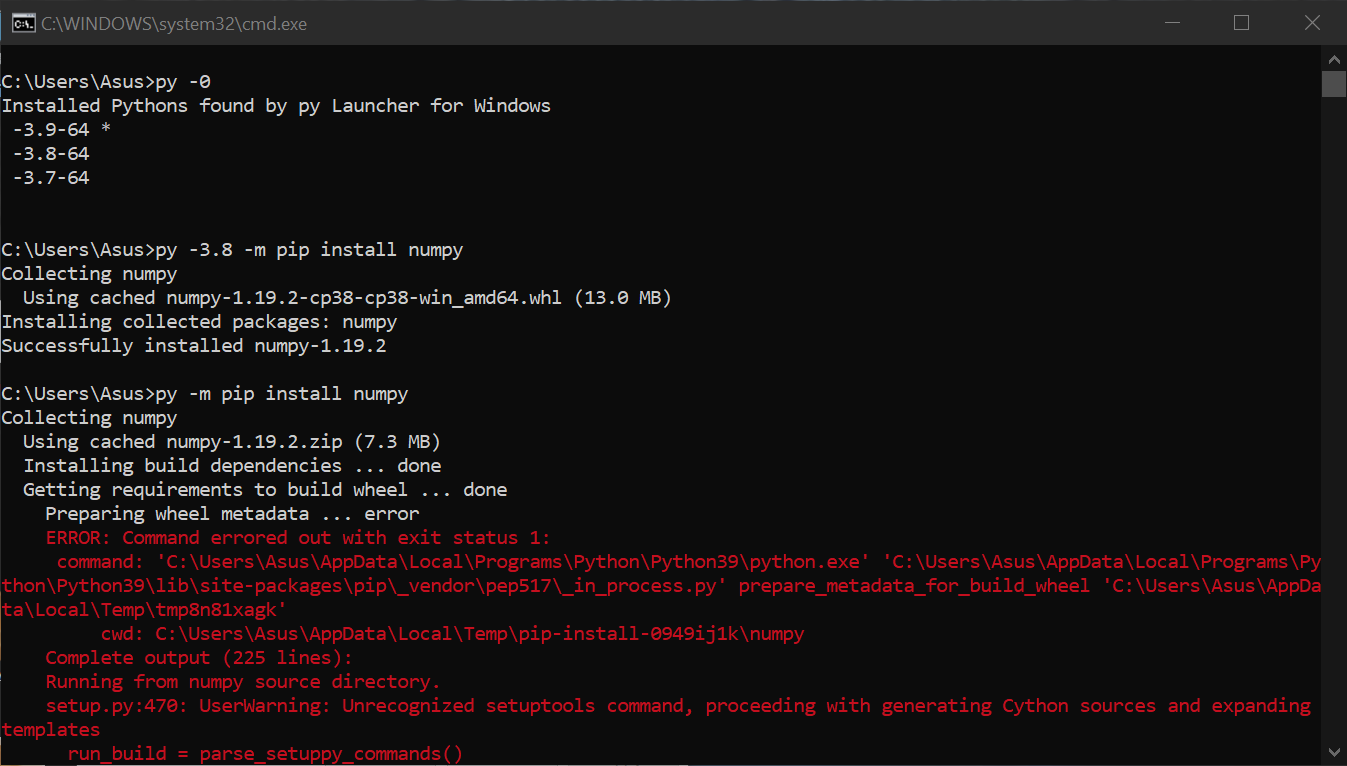 You may want to wait until numpy release an update)

Is there a way to get notified about the package updates??

You can “watch” their Github. I can’t think of nothing better right now, sorry! But, this way, you’ll see on your Github “feed” when they release a new version.