Is it okay to copy project designs?

Is it okay to copy website designs from project FCC’s examples? I mean, not to copy code, but to use their example to look at while coding, to try to make something like it. Because my problem is that I’m shit designer, and If I try to design it myself it looks like crap.
And anyway, do web developers need to know how to design websites? Or do they just get picture of site from designer and then make it in html,css,js etc. ?

I’ve done that sort of thing a lot. This is a course in developing, not design. There are a couple of things here.

@kevinSmith
3) Does putting site on portfolio means “selling it as your own work”?
and thank you for answer

If on your portfolio you are

Copying the design of a site

And not disclosing you copied another source, you would be

selling it as your own work. Not good.

So I can put it on portfolio sa long as I credit the original site?

You might avoid academic misconduct/plagiarism for crediting the originator. Why not ask the originator? Let him/her take a look at yours, and then they could advise you what is okay and what to change.

Not everyone has great design skills, which is why there are web designers and web developers. So long as your design is noticeably different from the other, you might be okay. Saying that, I’m not a lawyer or legal expert. Just think about all those people who use those site builder sites. They use the same templates as thousands of other sites, but only change the content. How many sites have you visited and thought, ‘yeah, that’s Bootstrap’? In those cases all of those sites are using the same stuff, but the content must not be identical.

As with most things, if in doubt ask for permission.

That depends on what you are doing. Many devs will clone a site like Netflix or some other well designed site as an exercise. This is a legitimate thing to do. Painters often copy great paintings. Jazz musicians often transcribe and memorize great solos. They may even show it off. The point is that they don’t say or even leave implied that it is their creative work. If you clone some great site, and want to put it on your resume, just make it clear that it is a clone. Seriously, just say, “This is a clone of _____.”

But again, borrowing little ideas here and there is fine. As the old line goes, Ggood artists borrow. Great artist steal." Or, I like what Jim Hall (jazz guitarist) said, something like, “If you take a bunch of ideas from one artists, it’s stealing. If you take a lot of little ideas from different people, that’s research.”

To expand on the other side…

Let’s say you see a web site with a really cool pull down menu design. That is a small thing, and probably a lot of other people are doing it, heck it may even come from a library somewhere. If you want to copy the look and feel of that, I think that is 100% OK. If you inspect their code and cut and paste - I think that is questionable at best.

But copying the look and feel of a feature, no problem. And I don’t think you have to credit that. Now, if I was in an interview and someone said, “Hey, I love what you did with this drop down.”, I’d respond with, “Thanks, I go the idea from the ____ site and really liked it and wanted to figure out how to make it work.” Not only is that honest, but it makes it clear that you’re always looking for new ideas and can implement other people’s ideas.

The word “copied” is being used loosely maybe. So many websites look alike these days, Menu, large picture, buttons.

In my opinion, on a real world project, when you copy someone else, it will be unrecognizable once the many changes and needs of the client (and yourself) are inevitably implemented.

“Copying” design can be a great start to a project that has nothing going on yet. You need to begin somewhere. But all the changes “to make it better” (from you and the client) will make the work unique and your own.

And there is quite some skill involved if you “copy a Netflix design” and code it yourself (copy the look, not the code). That specific achievement you could be proud of and show. Despite the similarity to Netflix. (“I backward engineered this myself”)

Also follow the “Golden Rule”–if you were the other designer you were copying, would you be honored, or offended, by your similar project being claimed as your own.

Just being honest is what is at stake here. A portfolio shouldn’t be a scam to fool people or lie yourself into a job. And there’s a lot more individuality in a site, beyond what the graphic design is. There are so many different ways to do the same thing.

And there is quite some skill involved if you “copy a Netflix design” and code it yourself (copy the look, not the code ). That specific achievement you could be proud of and show. Despite the similarity to Netflix. (“I backward engineered this myself”)

I partly built a page called Stalkbook. I wouldn’t have the page hosted online even though I think it differs enough from that other book, whose actions inspired it. 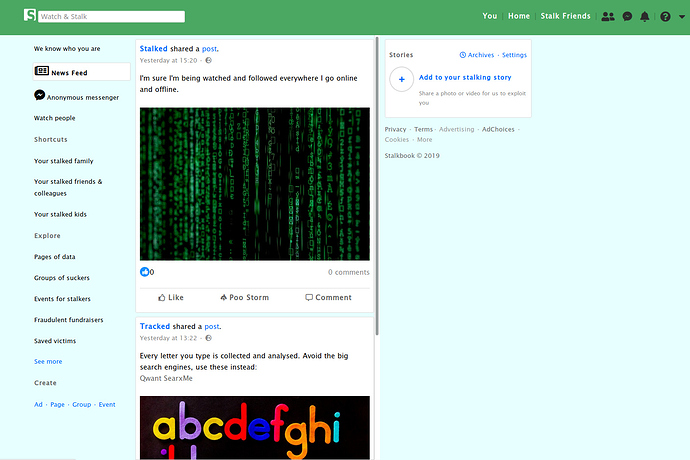