My Tribute Page, all feedback welcome

This is my attempt at the Tribute Page and was hoping to get some feedback. I feel my code (particularly the CSS) might have a little too much and could be consolidated a little.

Many thanks for looking 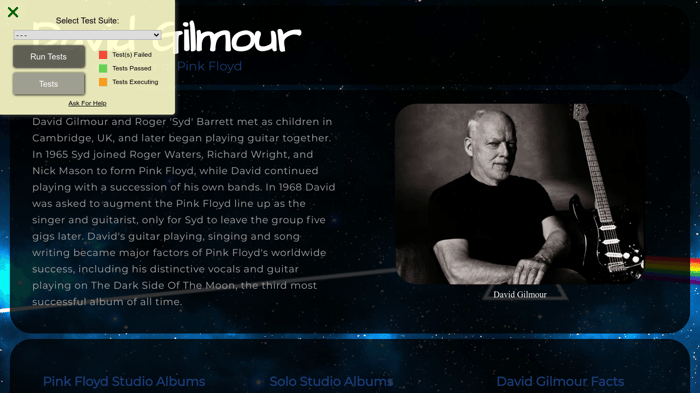 My attempt at the first project from freecodecamp. ...

• You may want to change your wikipedia link color (this blue is not very visible).
• In my opinion your id=“sub-text” is a little bit to dark as well, but that’s just personal.
• last thing I would change is make a little bit smaller h1 text in title section for mobile, because you have horizontal scrollbar.

. I’d just echo @MarekMac on the text visibility/contrast issues. One other suggestion would be to place the image above the text on mobile even if you have to resize it some. Cool tribute page

I really appreciate the feedback, thanks for your input

Thanks for your feedback, I did notice the h1 on mobile but because I spent so much time working out the stacking on mobile for the image, I forgot to tackle the h1 issue

I will work on this soon.

I have rewritten your code in order to simplify it a bit more.

I see that in your code you repeat the same styles several times and I have put them in a single class.

I took the advice that your colleagues have given you and I have also applied them.

Another thing I noticed is that you use units of measure when the value is zero, you can use “0” instead of “0px”.

I also saw that you repeated the @media for the same screen width.

Another thing is that you have:

When you use flexbox it has nowrap by default. So it does not necessary.

I hope these details help you to improve much more.

I’m not an expert either, but I think it’s not wrong to share what I’ve already learned with others

Hi Jose
Many thanks for looking at my work and taking the time to alter things.
Having said that, I actually still prefer the design of my version

. Let me explain why…

I know my design choices may not be everyone’s ‘cup of tea’, so forgive me if you think it’s crazy

Many thanks again for your time and input