What developer tools do you need?

Hi everyone! Kind of random question but, as developers, is there one tool that you don’t have that would make your day to day life easier?

I’d really like a text editor that doesn’t cause me mental and spiritual harm. Most of them are “good”, but I have yet to find one that’s really great. They each have their own quirks that, from time to time, cause me to grab my laptop screen by the sides and scream silently.

A magical focus tool, so I wouldn’t be trying to learn 25 things at once.

is there one tool that you don’t have that would make your day to day life easier? 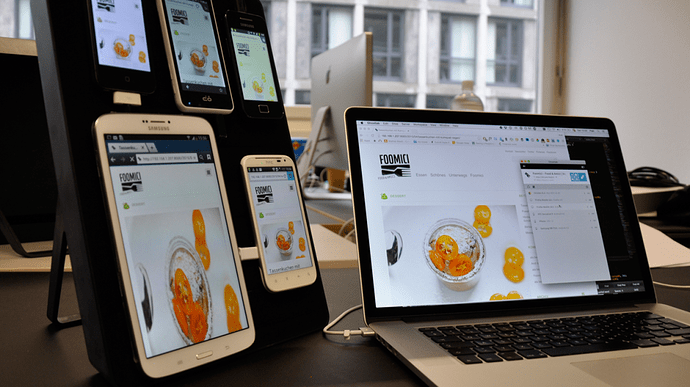 I’m now looking for some Samsung or LG phones to add to the setup (eBay).

Wow - is your employer paying for all of those?

Above photo is a stock photo. I’ll post my setup when it’s done.

Wow - is your employer paying for all of those?

Yep, he’s paying. But I AM the employer… employer of one, myself.

Have you tried Chrome developer tools?
Under View>Developer>Developer Tools, on the top left, click on the second icon (Toggle Device Toolbar) From there you can test multiple screen sizes, it even has a list of devices by name under ‘Responsive’ and ‘Responsive’ > ‘Edit’ lets you select from multiple devices to show in the pulldown menu.

@PortableStick I know what you mean! Some of them are so quirky for sure. One that is just smooth and completely user friendly would be amazing.

@Soupedenuit Hahaha I have like 18 tabs open at any given time because I’ll be reading something then start searching something related and so on until I completely forget where I started. Unfortunately I don’t know magic so I can’t help either of us out there.

@owel sounds like you have a crazy amount of hardware! i was thinking more along the lines of software tools though…

@luishzapata Yes! I love Chrome dev tools. So awesome. I’m trying to think of something that I can create for a project though.

I’ve used that too. It’s okay. But it’s not the same as testing on the actual device. Because in the end, you still have the Chrome desktop browser engine running, albeit on a simulated small display screen size. You also have the performance of your i7 desktop CPU rendering your page (which will be pretty fast).

For example: A sliding/slideOut menu works fine on the Chrome desktop browser. It works flawlessly fine on an iPhone 6 too… but on an iPhone 4, I get a momentary flash of white blank screen, before the same menu slides out. The CSS animation is also choppy (due to slow speed of older iPhone 4 processor). Granted it’s not a show-stopper, but at least you’ll know in advance if there are any issues… and up to the client to say it’s acceptable or not.

It’s also very convenient to see the site showing simultaneously on your desktop browser, and phone/tablet devices all at the same time. So any change you do, will immediately reflect on all devices during development. If you click on a menu item to load a different page, all devices will also change to that page. You don’t have to touch every device to change link/page.

In the past, I’ve had a client report there is X problem with my site on a particular page when displayed on mobile, or the link/page wasn’t clickable when viewed on his Android phone. (But it worked fine on desktop browser, even on simulated small screen on desktop browser.) An overlay div was covering the link, and with a mouse, the underlying a href link was still clickable, but not for a finger on a mobile device.

Again, it’s not mandatory/required to have this kind of setup, but it is very convenient and very nice to be able to do it.

18 tabs - that’s showing good restraint. I have 47 open at the moment. I have a rule to have no more than 52 open; more than that and the tab icons disapear on my laptop, which makes finding tabs annoying as f…

“Rebase on master and squash with the message ‘new feature’”

Well, if you’re looking for a nice text editor, I’d go with Brackets. It’s a really nice text editor (it used to be Adobe Edge Code CC), it’s free, and it isn’t nearly as annoying as DreamWeaver (which auto-completes everything in sight while you’re still typing). Two of my favorite features are that it shows you a menu of available functions and methods (but it’s not too invasive), and you can ‘collapse’ code by reducing functions to just one line of code (for readability).